Lately I’ve had to work with multiple malware samples that are extremely heavyweight in size. Usually about 300 MB and above, depending on the sample. This large sample size can significantly hinder analysis with sandboxes due to upload size restrictions, and it can even hinder analysis tools on your local system by causing them to slow down while processing a large file. In this post I’ll go over one trick I use to reduce that malware sample size to make it easier to analyze or submit to sandboxes. 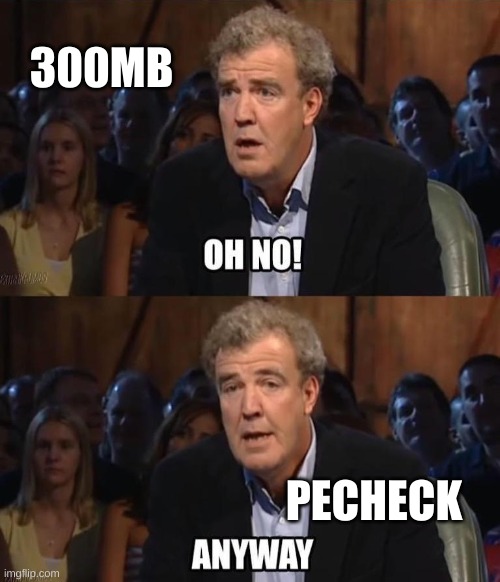 While running scanning commands like Detect-It-Easy you’ll probably notice a significant delay in getting output due to the sheer size of the sample. Usually when a malicious binary is this size, there is some form of garbage data appended to the end of the binary. The simplest way to do this is just append a bunch of zeroes/null bytes to the end. We can inspect this using xxd and tail.

In addition, we can get some extra verification that the garbage data is zero-filled by performing an entropy measure. Shannon entropy measures the “randomness” of bytes in a file. Scores approaching 7.9 - 8.0 are usually encrypted, 5.0 - 7.0ish are usually compressed, and extremely low values indicate a lot of repeating data in a file. We can perform a simple entropy measure using diec.

The total entropy of the 300 MB binary is 0.02, which indicates there is a lot of repeated data in the file. Specifically looking the last row of output for an “Overlay”, the specific entropy for that portion is 0.00000000450037 (converted from scientific notation). This is a ridiculously low entropy value, and it indicates the data in that overlay portion appended to the binary is likely all a single value: zeroes.

Working hard for that weight loss with pecheck

Thankfully we don’t have to count calories to get this binary down to size! This post from Didier Stevens for SANS got me on track to using pecheck for lowering binary size. If you’re dealing with a signed, heavy binary, I highly recommend reading that post for the extra parts on removing the signature as well as the zeroes. To get this specific binary down to a manageable size, we can take a couple easy steps:

Running pecheck with no options besides the binary name gives us confirmation that 305 MB of this file are all zeroes, and we can easily remove them with another pecheck command:

The lighter_GoogleDrive.exe binary is much smaller than the original, and it’s still recognized as a Windows application. Now you can put the binary into sandboxes or any other analysis tools that have size limits! There’s just one caveat, as pointed out by David here:

The downside is the file hash will change.
So you may want to add a comment with the original hash before cleaning the null padding. ? 🤔

After writing the last post on bringing malware down to a manageable size for analysis, I got some good feedback on different ways to achieve the same results outside of using pecheck. In this post...