This post is dedicated to my colleague Matt Graeber (@mattifestation) who showed me how to do the manual calculations and carving of PEs using CFF Explorer and a hex editor, making me think “there has to be a tool for this”. There are loads of ways to deploy .NET Framework applications, and I’ve mostly been familiar with just the traditional compile-and-run method. As .NET malware has evolved, adversaries have looked to use different deployment reasons for the same reason as legitimate developers. In some cases it’s easier, allows bundling files in different ways, or other reasons. One malware family named DUCKTAIL has recently embraced deployment in as a “.NET Single File” deployment feature. This feature is interesting in the sense that it allows a developer to deploy a .NET application to systems without requiring the systems to have a pre-deployed .NET Framework runtime installed. This dependency-free deployment is achieved by appending multiple binaries together into a single file, resulting in a large executable with multiple executables inside. In this post we’ll take a look at a DUCKTAIL sample and how the “single file” deployment choice affects malware analysis. The sample we’re working with is here in VT: https://www.virustotal.com/gui/file/740fd780b2b45c08d1abb45cddc6d1017c9fcc6bcce54fd8415d87a80d328ff6.

As always, we can start out triaging the file using a combination of diec and pehash. First, let’s figure out the file type:

Right off the bat, we can see our output is a little different than what we’d expect for a standard .NET Framework app. In this case we see diec says the file was compiled using Visual C/C++ instead of a .NET language like C# or VB. Usually for .NET apps, the output would look similar to this:

We know for sure we’re dealing with a Windows Portable Executable (PE) file, so let’s take a look at the import and rich header hashes. If you’re looking to get the imphash for a sample, you can easily do so with pehash. For the rich header hash, I like using the tool I made here that leverages the Python pefile library.

The imphash and rich header hash values are different that what I expect of traditional .NET malware. Usually, .NET executables have an import hash of f34d5f2d4577ed6d9ceec516c1f5a744 and .NET DLLs have an import hash of dae02f32a21e03ce65412f6e56942daa. In addition, .NET executables and DLLs usually don’t have rich header hashes. So this sample triages more like a native, unmanaged code binary than a .NET one.

Digging deeper with exiftool and pedump

We can get our first hints of the app being compiled as a .NET Core single file executable using exiftool and pedump.

The file size is 56 MB. It’s not the beefiest binary ever, but it’s still pretty heavy and that can indicate multiple binaries in a single file. From here we can look at binary properties with pedump to get some more data. In the interest of brevity I’ve cut down the pedump output to just the exports since it contains the relevant bits.

.NET core “single file” apps are multiple binaries appended to one another, right? Well, the first binary in the append chain has the responsibility of being a “.NET loader” that loads subsequent .NET resources (appended after the loader) into memory at runtime. Once the resources get loaded, the actual .NET app gets run. The export details seen here in pedump are from the .NET loader overhead itself, which results in some good predictability. The .NET core “single file” apps should usually have exports like corehost_initialize, corehost_load, and others.

We’ve got our bearings a bit and we know from documentation that a “single file” app is just a bunch of binaries appended to each other. So, logically, we should be able to walk the file and extract all the PEs from it. We can do this using pecheck.py.

Using pecheck with arguments to list the available PEs in the file reveals a whopping 94 different PE files within the single original ducktail.exe sample. Thankfully, there are only a couple of PEs here that are interesting to us: 35/Telegram.Bot.dll and 36/DataExtractor.dll. We can extract those with pecheck as well!

Decompiling is a breeze with this sample thanks to ilspycmd. Lately I’ve been using it with command line arguments to export code as a .NET project so I can get extra details in there like the icon used by the malware.

From here, if you want to get into deeper analysis you can start with the Program.cs file and simply follow the flow of code to other files as relevant! 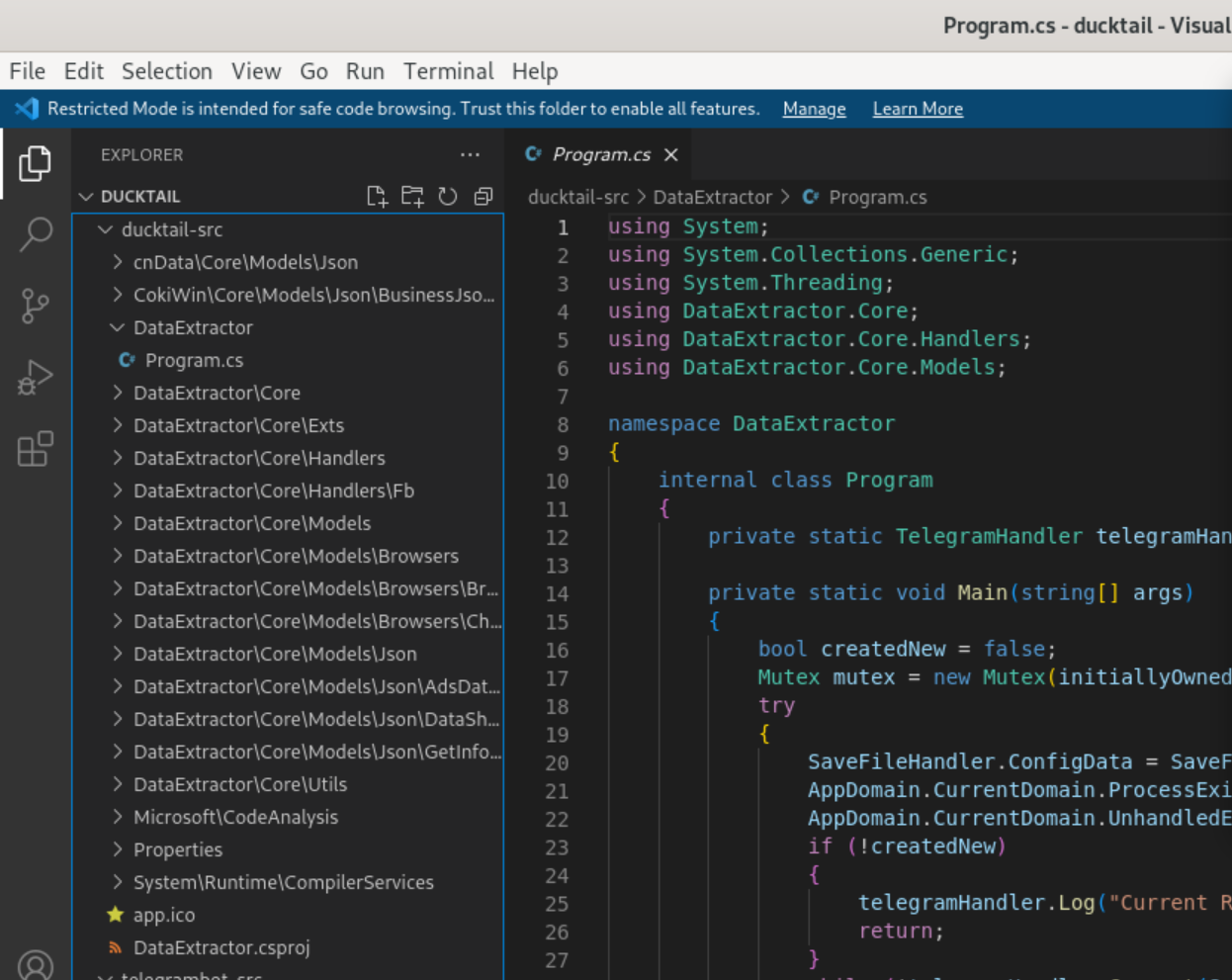