Adversaries can get really creative with ways to hide and execute payloads. In this post I’ll cover one instance where an adversary appended STRRAT to a MSI file to make it look legitimate during analysis. If you want to follow along at home, the sample I’m working with is available in MalwareBazaar here: https://bazaar.abuse.ch/sample/0c3ff324e87c65c09f862f426d137206b5e895e70a85e6831a4aa5cc808a80be/.

MalwareBazaar says the sample is a MSI file, so let’s verify that claim using file, diec, and xxd.

All of our checks conclude that the file indeed has magic bytes for a MSI installer file. We can also take a look at the file size using ls or exiftool.

So the MSI file is about 658K in size. It’s a decent enough size to have some executable content within, so let’s tear into it.

MSI files are structurally similar to MS Office 97-2003 documents. In fact, that’s why the file command returns Composite Document File V2 Document for MSI files as they share the same magic bytes with documents. This is good news because it means we can use oledump.py to view and extract content from streams within the MSI file.

Within the oledump.py output, you can ignore the stream names. After working with numerous MSI files in oledump I’ve found that having unreadable stream names is fairly common. Instead, let’s focus on the first two columns. The left column is a stream number and the middle is a size value in bytes. From here, we can inspect the individual streams using oledump. To do this, work from the stream with the largest size value downward until you start encountering empty-ish streams. In this sample, we want to inspect streams 3, 6, 4, and 2. Stream 1 should always contain summary information about the MSI file.

In stream 3 we can observe string values that might be related to a configuration file or something else related to the installation process. Since this is our largest stream, this is already a bit problematic. If the installer contains EXE binary content, the binary will likely be larger than a text file. After dumping out this stream with oledump.py -d we can look at the contents and see that it doesn’t contain any scripting commands either. This dumping process is easier to do than show in a post, so I’ll leave that for a reader exercise :).

After checking out the remaining large streams we can’t find executable content in the MSI.

Clearly there is some form of content here otherwise AV vendors wouldn’t call the file malicious. Also, if we go back and look at the oledump output we can see the stream sizes, when summed up, fall significantly short of 658K. In situations like this I prefer to use xxd and less combined to browse the hex and ASCII side-by-side to look for patterns.

Using the search feature of less and the string “MZ” we found some executable content. We can try to unpack that in a minute after we get done browsing the bytes. Once we get toward the end of the MSI file we can see some more interesting strings.

In the strings we can see some references to “carLambo” and “.class” files. These are significant findings because “.class” files are Java bytecode files. We can hypothesize that there is likely Java executable content attached to this MSI file. This sort of thing has happened before, in fact there was a bit of a hubbub back in 2019 when VirusTotal talked about it in a blog post. I also published one then, doing a bit of tinkering.

Long story short, you can append Java Archive (JAR) files to MSI files without hindering the operation of either file type. Java reads the JAR from end to front and msiexec reads from front to end. In fact, we can rename the MSI file to delivery.jar and view the Java contents using JD-GUI in REMnux. 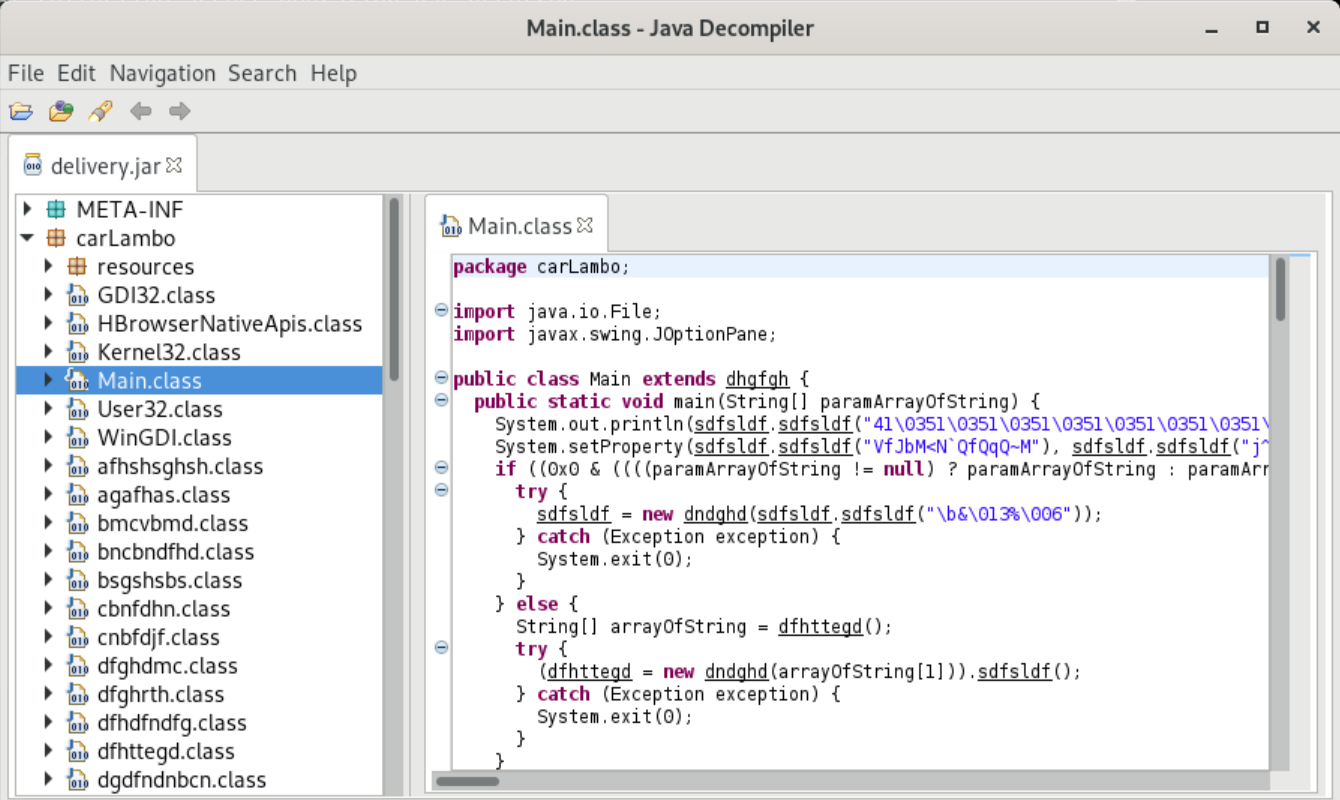 As an alternate path to extract the Java class files, you can also use binwalk.

By taking this approach the binwalk tool also extracts the relevant EXE files.

From here we can work with the extracted files as we please! The executable content in _75C053BA9648745475BB4EE6B8141822 isn’t malicious and seems to just be part of the MSI “background noise” here. Under the carLambo folder we can browse and decompile class files as desired using JD-GUI, cfr, or another tool.

How do we know it’s STRRAT??

Alright, the first piece of evidence that this malware is STRRAT is that the entire Java package inside the JAR file is named “carLambo”. Googling "carLambo" java gives you loads of sandbox reports and some analysis reports pointing to STRRAT.

The next piece of evidence is the structure of the JAR file. There is a resources/config.txt file. This is consistent with STRRAT. In addition, despite other classes being obfuscated, there are deobfuscated classes referring to Windows USER32, WinGDI, Kernel32, and HBrowserNativeApis keywords. These are also consistent with STRRAT based on documentation from Jai Minton.

Alright, that’s where I end tonight so I can go to bed. Hopefully in the next few days I’ll put together another post on analyzing this STRRAT sample some more so we can get its C2 address and such. Thanks for reading!

In my last post I walked through the analysis of an unusual MSI file that an adversary had tacked a STRRAT Java ARchive file to the end of the MSI contents. In this post, I want to walk through a m...

This post is dedicated to Josh Rickard (@MSAdministrator on Twitter) since his feedback on my blog posts has cut my triage time on MSI files down in a massive way! After writing an analysis of a MS...