I personally despise trying to analyze shellcode, but shellcode is becoming more common in malware of all types. From Metasploit and Cobalt Strike to GuLoader, loads of malicious tools include shellcode as injectable payloads to make detection harder. In today’s post I want to look at one of the most recent iterations of GuLoader and how it deploys its shellcode. If you want to play along at home, the sample I’m analyzing is in MalwareBazaar here: https://bazaar.abuse.ch/sample/dcc73a1351b6b79d48f7b42a96edfb142ffe46f896e1ab9f412a615b1edd7c9b/

For the first stage, MalwareBazaar says its a VBScript file, so we’ve already got a decent hypothesis on the file type. We can go ahead and confirm with file and xxd. Sure enough, it looks like we’re dealing with a text file, and the first few bytes of the text file looks like they might be a VBScript comment prepended with a ' character.

Looking at the details from exiftool, the size of the file stands out. Weighing in at 80 KiB, the script likely contains some binary/EXE content embedded inside. 673 lines of code, it’s a pretty decently-sized script. So let’s dive in!

Immediately on the first few lines of the script we can see several lines of VBScript comments. Usually comments are for code documentation (heh, right?) but in this case the adversary decided to put in some garbage code. This sort of thing is usually intended to stump static detection rules, lower AV detection rates, and slow down malware analysis. After a quick glance at the comment lines, there’s nothing that really tells me that we need to keep them, so we can just ignore or delete them.

Next up in the code we have a simple sleep timer right after some variables get defined. The script sleeps for 2000 milliseconds before moving on to the next stage.

Down in the next section the adversary decides to set the sired and CCA variables multiple times in a row. No idea why they do it like this, maybe they also hit the save button in MS Office multiple times for safety. The sired variable contains a Wscript shell object and CCA contains a file system object for file writing.

And now we get into the good meat of the script. The Fotografe6 variable is built over multiple lines and contains what loks like a hex string. I don’t see a traditional MZ header represented as 4D5A in hex, but it could be further obfuscated somehow. We’ll just have to watch and see how the script uses it.

The clabbering variable, just like the previous one, is built over multiple lines. In this case it appears to be base64 code because once we feed some of the chunks into CyberChef with the “From Base64” it decodes into valid text.

Now that we have an idea of the materials being manipulated in the script, let’s see how the script uses them. The next chunk of code looks like it’s building a PowerShell command. At this point I’m thinking the base64 chunk of text in clabbering above will likely be fed into PowerShell for execution. Fotografe6 looks like it gets fed into a baggrun() and lugsai() function. Since shellPath contains a file path and the string ISO-8859-1 refers to encoding, my hypothesis is that lugsai() writes the contents of Fotografe6 to disk. Let’s go confirm that.

The lugsai() function looks like it works with an ADODB.Stream object, picks a character set, opens a file, and writes text to disk. So far it looks like our hypothesis was correct.

And now the script starts making some movement outside of itself. The -EncodedCommand string here indicates we’re likely going to see a PowerShell command with a base64 chunk of code. Sure enough, the base64 code in clabbering eventually gets used for the PowerShell command. So let’s

After decoding the base64 in clabbering with CyberChef we can see some PowerShell code that gets executed. Just like the VBScript, the first line or two just contains a useless comment. Looking through the rest of the code there are also a few comments mingled among the useful stuff. For a bit more brevity I’ve gone ahead and removed comments from the code I show here. To slow down analysis some more, the adversary also threw in a bunch of Test-Path commands. None of them seemed to serve any function, so I removed them from the code here.

The first big chunk of PowerShell is an Add-Type cmdlet followed by some C# code. Add-Type allows you to import a .NET class DLL into memory to work with in PowerShell. When combined with the -TypeDefinition, you can provide some raw C# code that gets compiled into bytecode at runtime and loaded into PowerShell. In this case, the adversary defines a .NET class named Ofayve1 that contains Platform Invoke (P/Invoke) code that allows the adversary to call native Win32 functions from .NET code.

From here in, the adversary references that class/type to call Windows API functions. The first three are pretty self-explanatory and I’ll put links to their documentation here:

When combined together, these functions read the contents of Champag6.dat and mapped them into memory at $Ofayve3. These contents included the hex string seen earlier, and my working hypothesis is that the file is some form of shellcode.

The final part of the script calls CallWindowProcW, which was unusual for me to see. I decided to get a little wild and do a Google search for “CallWindowProc shellcode” and ended up running across an interesting article on using function callbacks to run shellcode. Reading down the article, I could see some code that looks very similar to our sample:

Sure enough, the GuLoader code above seems to match that callback article.

But is it GuLoader?

Honestly this is hard for me to tell. I largely trust the GuLoader tag in MalwareBazaar but it’s always good to have extra proof. When I open up the suspected shellcode in Ghidra there is some definite XOR activity going on. 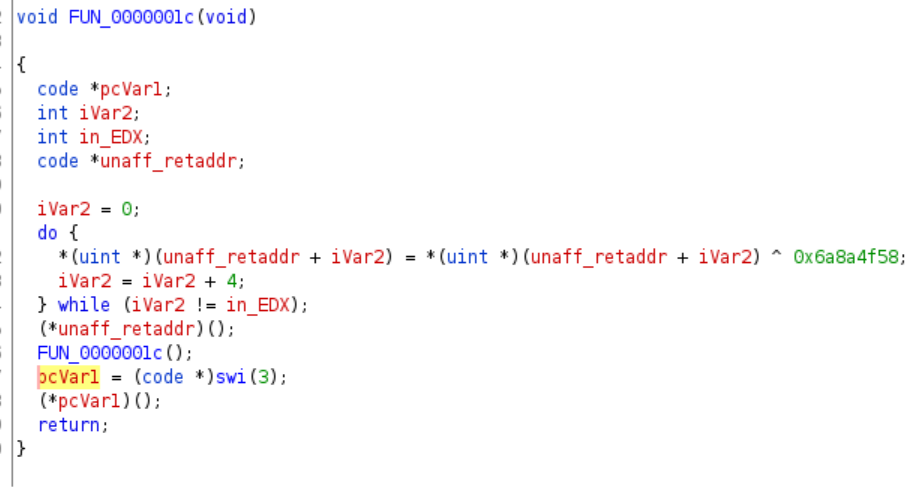 And when I use this little chunk of Python code, I can reverse that XOR:

The resulting shellcode gets some hits from capa as containing anti-VM and sandbox evasion measures.

This is where I stopped my particular analysis. GuLoader is rather famous for anti-VM, anti-sandbox, anti-whatever, so I feel pretty satisfied with our progress so far. Given the shellcode capabilities and the face that GuLoader usually involves shellcode like this, I’m good with calling it GuLoader.