Just like with RTF documents, adversaries can use XLSX spreadsheets to exploit the Microsoft Office Equation Editor. To add a little bit of complication on top, adversaries also sometimes like to encrypt/password protect documents, but that doesn’t have to slow down our analysis too much. For this analysis I’m working with this sample in MalwareBazaar: https://bazaar.abuse.ch/sample/91cf449506a9c3ade639027f6a38e99ee22d9cc7c2a1c4bc42fc8047185b8918/.

MalwareBazaar gave us a head start in asserting the document is a XLSX file. We can confirm this with Detect-It-Easy and file.

The file output indicates the XLSX file is encrypted, so step one is taking a crack at getting the decrypted document.

We can give a good first shot at finding the document password using msoffcrypto-crack.py.

And just like that, we got a little lucky! The password for this document is VelvetSweatshop, which has some significance in MS Office documents. For more info you can hit up Google, but the basic gist is that Office documents encrypted with the password VelvetSweatshop will automatically decrypt themselves when opened in Office. This is an easy way to encrypt documents for distribution without having to worry about passing a password to the receiving party.

To decrypt the document, we can pass that password into msoffcrypto-tool.

Alright, now we have a decrypted document to work with!

A good first step with any MS Office file is to check for macro-based things with olevba.

The output from olevba indicates there aren’t Visual Basic for Applications (VBA) macros or Excel 4.0 macros present. This leads me into thinking there may be OLE objects involved. We can take a look using oledump.py.

So it looks like we’ve got an OLE object in the spreadsheet that doesn’t contain macro code. I’m leaning towards thinking it’s shellcode at this point. Since that A2 stream looks like it is larger, let’s extract it and see if xorsearch.py -W can help us find an entry point.

It looks like xorsearch found a GetEIP method at 0x20E in the A2 stream we exported. We can use this offset with scdbg to emulate shellcode execution and see if that is what downloads a subsequent stage. When looking at the report output from scdbg, we can see several familiar functions. 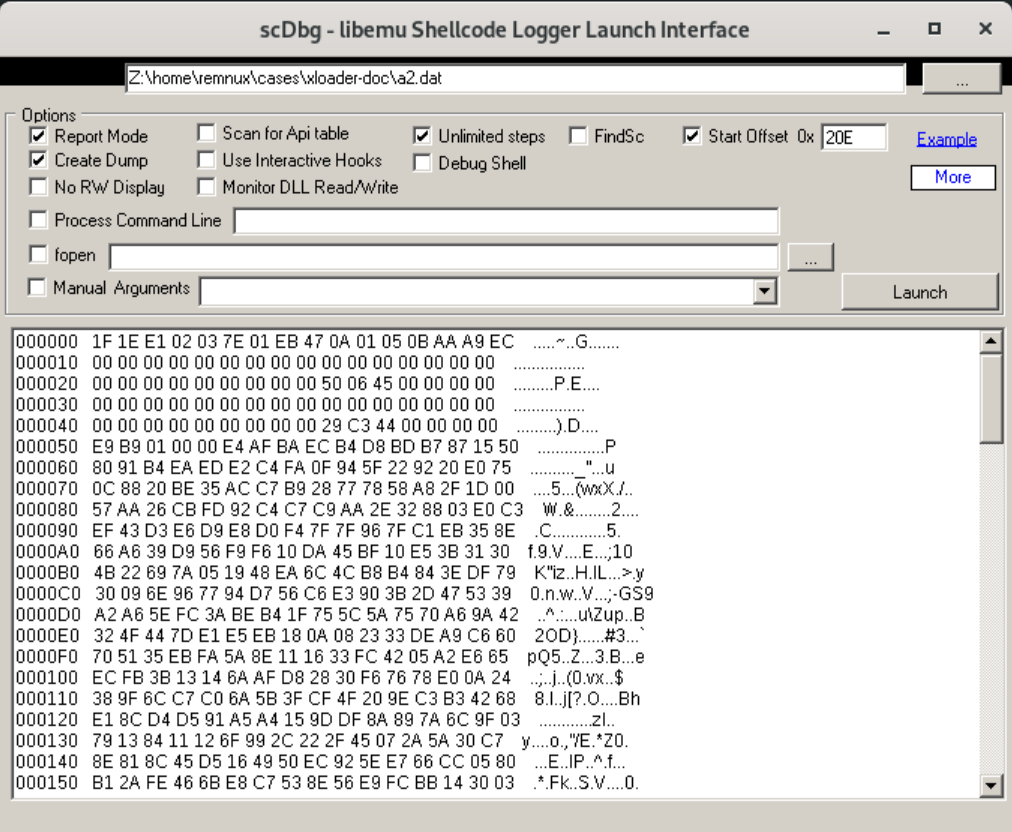 In the shellcode, the adversary uses ExpandEnvironmentStringsW to find the Public folder in Windows. Next, they use URLDownloadToFileW to retrieve content from hxxp://2.58.149[.]229/namec.exe and write it to C:\Users\Public\vbc.exe. Finally, they use ShellExecuteExW to launch vbc.exe.

We’re not going to entirely reverse engineer vbc.exe tonight, but we can get some identifying information about it. To start off, let’s take a look at some details using file and pedump.

The file utility says that the EXE is a Nullsoft Installer archive. We can confirm this using a couple data points from pedump. First, we’ll want to look at the executable’s PE sections. The presence of a section named .ndata tends to indicate the EXE is a Nullsoft Installer. Also, the compiler information section of pedump output will show the executable was made with Nullsoft.

To squeeze the last bit of information from the vbc.exe binary, we can unpack it using 7z. To get the most information, including the NSIS configuration script, you’ll need a version that is several years old such as 15.05 like in this post. I went back and downloaded version 9.38.1 of p7zip-full, the Linux implementation of 7-zip.

We can take a look in the [NSIS].nsi script and see what content would be executed:

When the NSIS installer starts running, it will execute the commands in .onGUIInit. These three files get written:

The installer then runs the command "$INSTDIR\lzxupx.exe $INSTDIR\mhwrt", waiting for the result. After it finishes, an Abort command processes. The abort causes the installer code to immediately skip to the function .onGUIEnd. Since this function isn’t defined in this particular script, the installer ends immediately.

How Do We Know It’s XLoader/Formbook??

This is where analysis dried up for me via code and I started leaning on sandbox output. Specifically, I looked at the report from Hatching Triage here: https://tria.ge/220211-wmgqsaeegl/behavioral1. When parsing the output, I noticed the sandbox made some identification based on the Suricata Emerging Threats rule ET MALWARE FormBook CnC Checkin (GET). Let’s see if we can validate that using the rule criteria and PCAP data from the sandbox. You can grab the Emerging Threats rules here: https://rules.emergingthreats.net/OPEN_download_instructions.html. I downloaded the PCAP from Tria.ge.

Once we unpack the rules, we can search them using grep -F to quickly find the alert criteria. 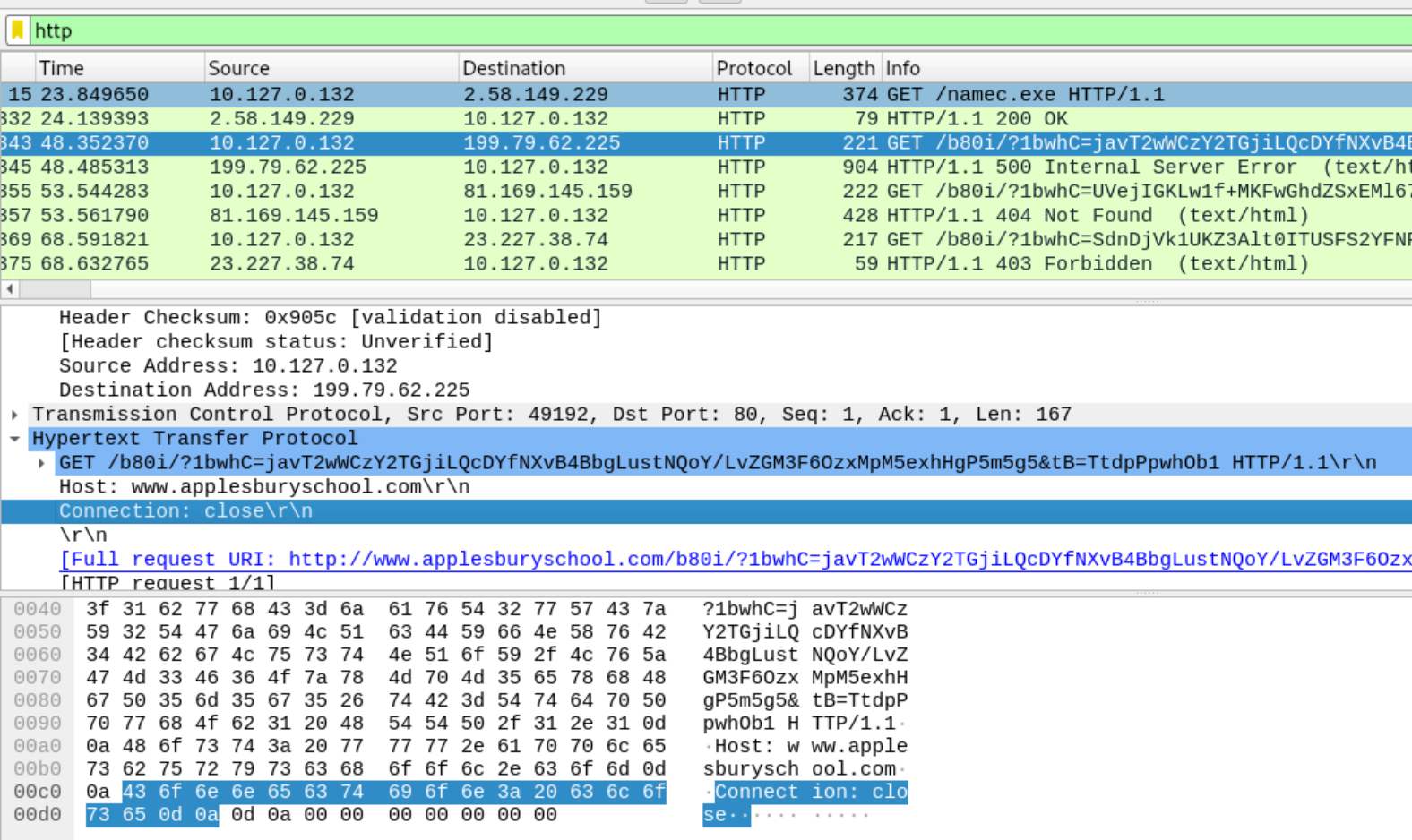 The first big pattern in the rules, content:"Connection|3a 20|close|0d 0a 0d 0a 00 00 00 00 00 00|", is matched in a packet going to www.appleburyschool[.]com. Finally, the rest of the URI for the request matches a massive regular expression for Formbook/Xloader.

It’s also possible to validate findings using the memory dumps in Triage! One of the fields in Triage indicated a YARA rule tripped on the memory dump 636-73-0x0000000000400000-0x0000000000429000-memory.dmp, which can be downloaded. This is a memory dump from process ID 636 in that sandbox report, which corresponds to an evil lzxupx.exe process. Using yara-rules, we can see some evidence of Formbook:

It looks like the contents of memory trip a YARA rules from JPCERT designed to detect Formbook in memory: https://github.com/Yara-Rules/rules/blob/master/malware/MalConfScan.yar#L381

That’s all for now, folks, thanks for reading!

When adversaries buy and deploy threats like AgentTesla you often see this functional and entertaining chain of older exploitation activity with some .NET framework tradecraft you’d expect from som...