Formbook is one of the threats that I categorize as part of the “background noise of exploitation” on the internet. While targeted attacks occur in scoped areas, anyone can go buy access for Formbook and distribute it to victims in an opportunistic fashion. This is really similar to the model of buying other stealers like Redline or RATs like Netwire. In this blog post, I’ll walk through the analysis of a VBScript designed to eventually drop Formbook to a victim. For those following along at home, the sample I’m working with is here in MalwareBazaar: https://bazaar.abuse.ch/sample/db00c50095732ed84821f321b813546431f298525fea8dbd1a4545c3abfa1fe1/.

To start off, let’s verify the first stage is a VBScript. We can use a combination of file, xxd, and head to do this.

The file output of “ASCII text” is consistent with what I expect from a VBScript file, it should be just text in a file. The xxd output is consistent as well. The ASCII representation of the bytes on the right side show plain text. We can take a look at the contents here:

Just looking at the code above gives us a couple leads. First, the transfer[.]sh URL looks like it downloads some code to execute in PowerShell. We can clean up the code a bit to see what the simplified script would be:

The PowerShell command issued by this script will then cause wscript.exe to spawn powershell.exe, download code from transfer[.]sh, and execute it using an Invoke-Expression cmdlet.

To get further in the next step, we can examine jramooooss.ps1. After inserting some line breaks to beautify the code, we have:

The PowerShell code is fairly brief. The $whatever variable contains base64-encoded text that soon gets decoded into $dec. Immediately after, PowerShell calls Add-Type and specified the decoded text as a TypeDefinition. This action assumes code passed into the TypeDefinition is .NET code, and PowerShell compiles that code into a .NET DLL module using the relevant compiler. After the .NET type gets compiled and added into PowerShell, the script creates an object of the type nShfVlDyjF.iqBLfCrFkA.BZUlFNxtGgtBOqDQPiWReSigo and calls the function ZbkipEZlNxjrowRvPNluqDfkU().

Sidebar- I’ve heard folks over the last few years say “PowerShell is dead, .NET is where the modern tradecraft is”. I strongly disagree, because I see PowerShell exploitation every day and modern adversaries simply mix PowerShell with .NET technologies.

The question now is, what code went into that Add-Type call? We can decode the base64 chunk ourselves, revealing some C# code. I’ve gone ahead and added whitespace and renamed some of the function calls to make it easier to read.

The ZbkipEZlNxjrowRvPNluqDfkU() function called branches into two additional functions. The first one downloads a Windows EXE file and pushes the contents into a MemoryStream object. The second function then takes the MemoryStream and loads its contents using .NET reflection. The method it uses to do reflective loading is slightly unusual. I typically see malware using [System.Reflection.Assembly]::Load(), LoadFile(), or LoadFrom() to load an EXE or DLL into memory. In this case, the malware uses a method called nLoadImage(). This specific method is part of the Reflection.Assembly or Reflection.RuntimeAssembly classes and is usually called by the normal Load() functions. This malware skips the normal loading method and specifically calls the underlying thing it relies on instead.

So far we have this execution pattern: wscript.exe > powershell.exe > compile C# > execute C# code to download and execute an EXE inside powershell.exe.

Getting to the next stage, we can tear into the downloaded EXE, RYJGJHJDGHR.exe.

RYJGJHJDGHR.exe, I can’t even spell it

Let’s figure out what kind of EXE we have using diec.

Immediately, Detect-It-Easy tells us we’re dealing with a .NET executable obfuscated with .NET Reactor. This is some kinda-good news because we can easily compile the executable to source even if that source is obfuscated. Since I can’t include the entire source of the executable here, I want to go ahead and share the hash and VT link: 51c7f45ca2d7d26be5e7d6b51aec8e0a. From here on in, I’ll show portions of the decompiled code as relevant. To obtain the decompiled code, we can use ilspycmd.

The big point to focus on is the Main() method, which is the entry point for this stage. The function contains an EXE and DLL that have both been encoded into base64 with some characters replaced for basic obfuscation. 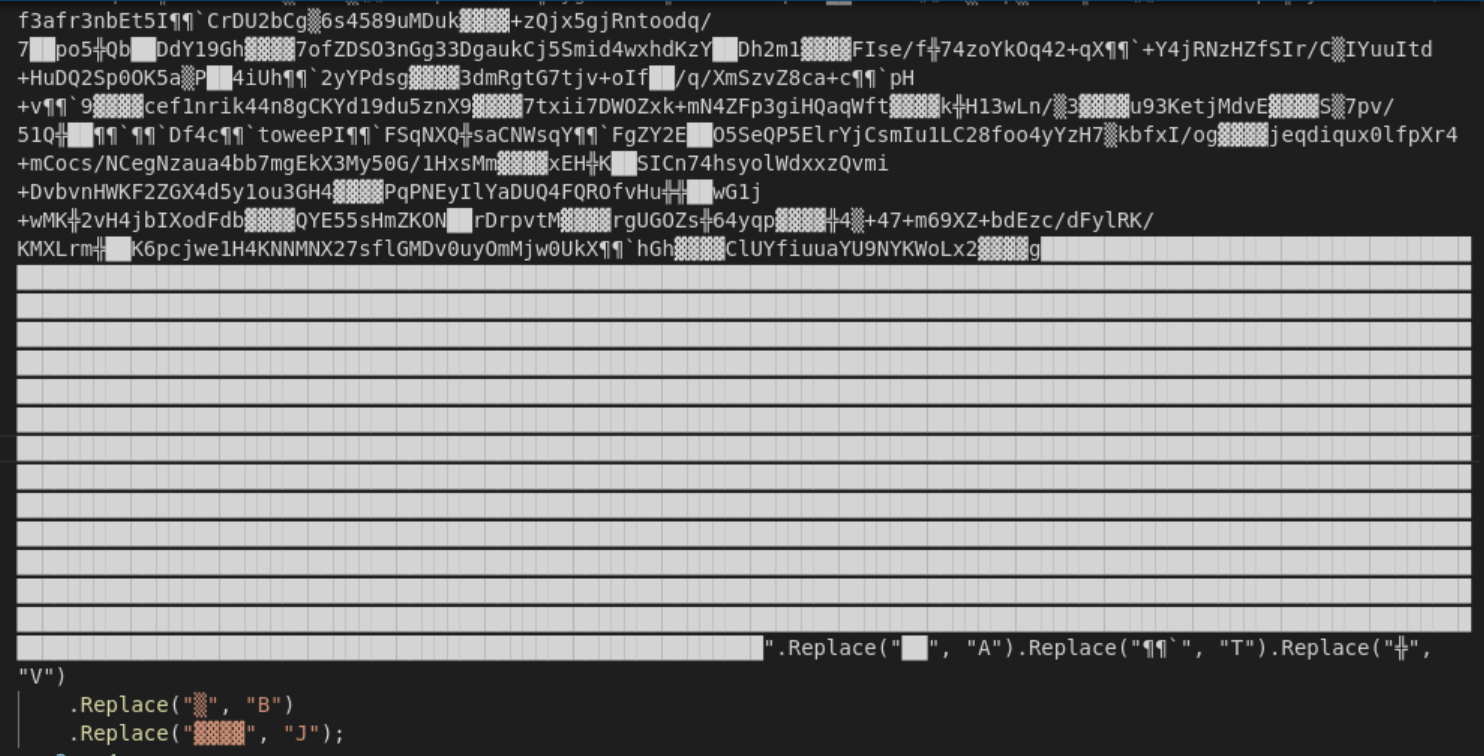 After the encoded chunks there is also a chunk of code containing a process path:

The extracted EXE is a native Windows binary and not .NET so it’ll take a bit more to tear apart. The good news is that we can identify it as Formbook using YARA, though!

This is where I want to stop for the night because I’ve achieved my goal of getting the end payload and identifying it. If you want to continue and learn more, I encourage you to try to find the injector code in RYJGJHJDGHR.exe, decode it, and decompile it to source. If you want to learn more about YARA, try to figure out how YARA knows the payload.bin binary is Formbook. Thank you for reading!

Adversaries love using free or cheap RATs or stealers, and I see a lot of RATs such as AsyncRAT during my daily malware analysis tasks. In this detection I want to examine a fairly recent sample fr...