In this post I’ll work through analyzing an AppX package from Magnitude Exploit Kit that drops Magniber. This adventure comes courtesy of a tweet from @JAMESWT_MHT:

This caught my interest because AppX packages have gotten some mileage as droppers lately courtesy of Bazar and Emotet.

To start off, let’s get a handle on what kind of file an AppX package is. We can do this using file.

The file command says the magic bytes for the file correspond to a zip archive. This is common with application or package archives like AppX, JARs, and more. If we want more confirmation we can always look at the first few bytes with hexdump and head.

With the archive unzipped, we can focus on significant files within the package. These are:

First, we can look at the AppxManifest.xml file. I’ve included the points of interest below.

First, let’s take a look at the Identity and Properties sections. Identity contains code signature information that should theoretically be included within the AppxSignature.p7x file. The Properties section contains metadata the Windows Store/Universal Windows App interface uses to identify the app. From the name Edge Update and publisher name Microsoft Inc, it appears the malware wants to masquerade as a Microsoft Edge browser update. Note how there is no link or control between the publisher display name and the actual signing identity. This is a major problem for victims trying to be sure of themselves.

The Application section identifies the EXE that will execute when the package is installed and run. In this sample, the EXE is eediwjus.exe. In the package content there is also a DLL, but that isn’t mentioned in the manifest. A possibility to explore might be that the EXE uses content from the DLL for execution.

Finally, the Capabilities section shows the app will execute with internetClient and runFullTrust capabilities. Documented by Microsoft, these capabilities just mean the app can download stuff from the Internet. Now we can jump into the executable content, the EXE file.

The EXE has these hashes:

Note the import table hash starting with f34d. That specific import table hash commonly appears with .NET binaries, so if you pivot on it in VT or other tools, you’ll find a lot of .NET. Using Detect It Easy in REMnux, we can confirm the executable is a .NET binary.

Sure enough, the EXE references the DLL in the same folder, and it includes the string DllImportAttribute. This is a good sign that the EXE will load an unmanaged DLL and call an export from it. Unobfuscated .NET code is usually pretty easy to decompile from bytecode form into source, so we can give that a shot with ilspycmd. If you’re on Windows you can also use ILSpy or DNSpy. The result is a pretty brief source file:

The entry point for the program is the Main function inside the eediwjus class. The DllImport code imports the function mhjpfzvitta() from the DLL and calls it with the argument lpBuffer. That argument contains an unsigned integer value of 5604. lpBuffer appears loads of times in Microsoft documentation around Windows calls like VirtualAlloc and others that need a buffer of memory for operation. It stands to reason that lpBuffer here might correspond to some form of a memory management call.

The DLL has these hashes:

Our pehash command didn’t find an import table hash, so that’s interesting. There may not be an import table in this binary or it might be mangled. We can take a look using the Python pefile library.

Sure enough, the binary doesn’t seem to have an import table hash or rich header hash. Maybe those parts don’t exist? We can confirm with pefile again.

Sure enough, the import table is apparently empty and no rich header exists for the binary. This is slightly unusual, so let’s see if we can run some more commands to find capabilities before jumping further into analysis.

The Mandiant tools floss and capa yield nothing significant.

Yara tells us more of what we already know.

A pedump command gets us some export info. You could also get this with pefile in Python, I just like this output better.

The export mhjpfzvitta() jives with what we expect coming from the EXE previously seen. This is probably our best entry point to examine the DLL.

Getting Dirty In Assembly

I usually work with Ghidra, but Cutter seemed to have a better representation of the assembly for this binary.

The entry point immediately calls a function at offset 18000113f and returns. Once we go to look at the assembly for that function, we see quite a wild execution graph. 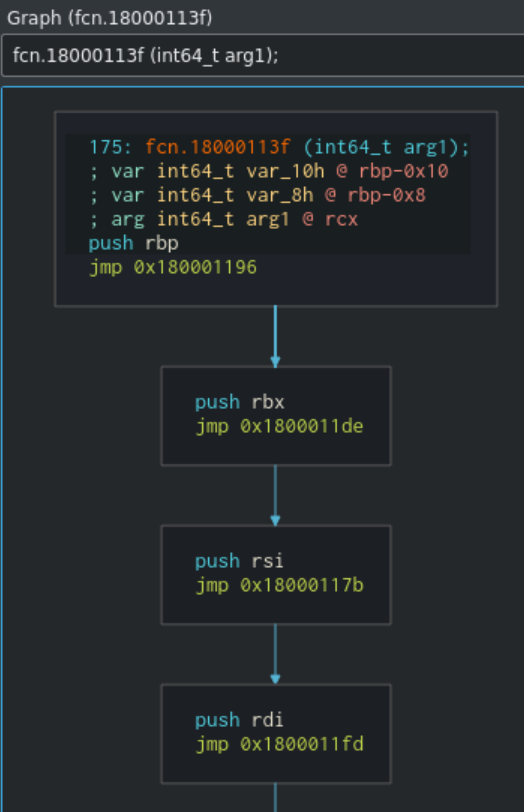 Once entering the function, the sample contains loads of jmp instructions that cause execution to bounce around to various points of the binary. This makes it hard for analysts to follow execution, and eventually we see some more evidence of suspicious activity in decompiled code.

Since the sample doesn’t have an import table, it’s relying on manual syscall calls like one to 0x18 for NtAllocateVirtualMemory. Avast saw this with Magniber in the past, alongside the jmp obfuscation. 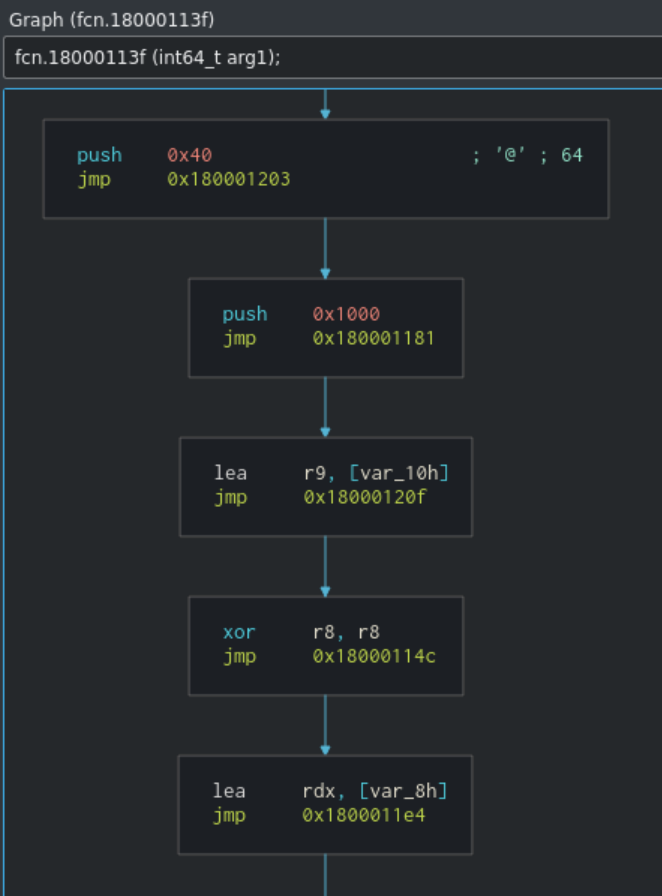 While I’m not yet skilled enough to tear much more out of the binary through static analysis, my eye was caught by one section of code that pushes 0x40 and 0x1000 to registers. These two values sometimes pop up when malware calls VirtualAlloc. 0x40 refers to PAGE_EXECUTE_READWRITE protection and 0x1000 refers to MEM_COMMIT. Since these values popped up in the sample, we can hypothesize that the sample may inject or unpack material into a memory space.

How do we know it’s Magniber?

I didn’t have luck getting Yara rules for Magniber to match this sample, so the best references I have right now are the tweet from @@JAMESWT_MHT and the blog post from Avast showing similar jmp obfuscation and syscall references.

AgentTesla is a .NET stealer that adversaries commonly buy and combine with other malicious products for deployment. In this post I’m tearing into a XLSM document that downloads and executes furthe...

Adversaries love using free or cheap RATs or stealers, and I see a lot of RATs such as AsyncRAT during my daily malware analysis tasks. In this detection I want to examine a fairly recent sample fr...

A Tale of Two Dropper Scripts for Agent Tesla