A Tale of Two Dropper Scripts for Agent Tesla

In this post I want to look at two script files that drop Agent Tesla stealers on affected systems and show how adversary decisions affect malware analysis and detection. If you want to follow along at home, I’m working with these samples from MalwareBazaar:

The first script (hash starting with 46dd) is crafted with love using obfuscated JavaScript and shows how an adversary made the decision to download subsequent stages rather than embed into the script. The second script (hash starting with ac05) is crafted with care using VBscript and shows another adversary choosing to embed a second stage into the script rather than trying to download more content.

In the downloading path, we can see that the script is fairly obfuscated, but brief:

We could potentially make this code prettier using a NodeJS REPL but the adversary chose to leave most of the essential stuff in plaintext for us. The strings MSXML2.XMLHTTP and hxxp://mudanzasdistintas[.]com.ar/vvt/td.exe indicate a second stage likely comes from a downloaded executable. The string shell['Run'] indicates the script likely launches that second stage at th end. While the script is relatively short, the majority of the script contents focus on obfuscation while not actually performing effective obfuscation. Since the adversary chose this route, we can make a few hypotheses:

We can test out these hypotheses using a combination of static analysis and a sandbox report. For file size, we can look at properties using exiftool or filesystem tools like ls.

This script weighs in at 1917 bytes, fairly small. From the Tria.ge sandbox report, we can also confirm wscript.exe makes a network connection and at least one file modification to write the executable. 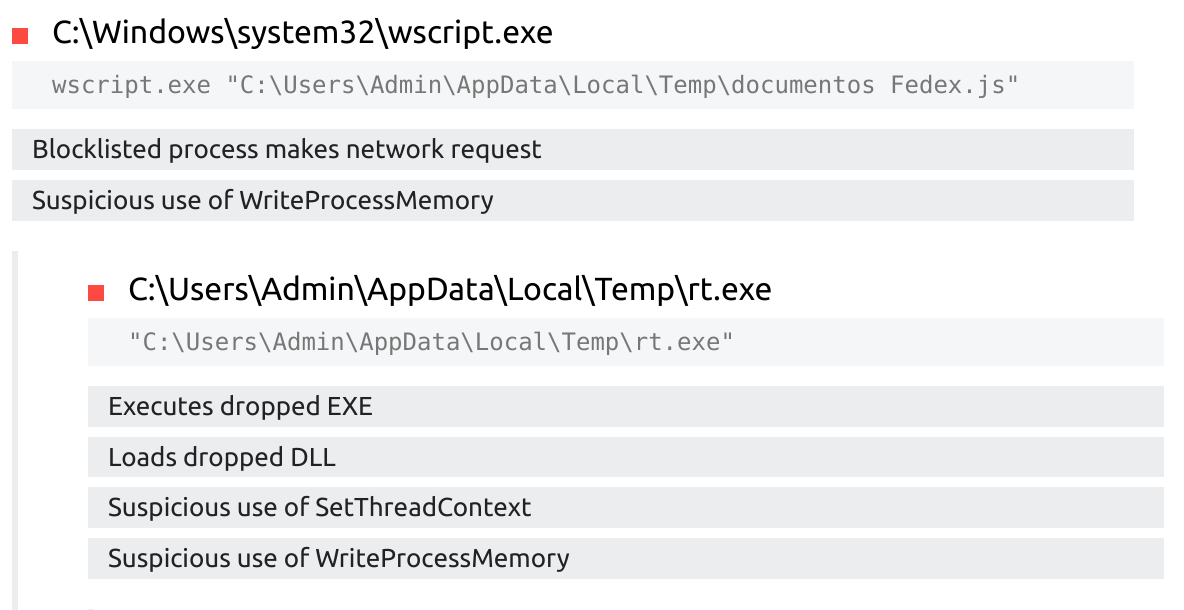 If we’re looking for detection ideas, we could look into analytics that involve wscript.exe making network connections as well as file modifications.

In the sample that embeds a payload, we can first see that the script contains a lot of content.

I’ve included the first and last parts of the script for brevity, but the exiftool output shows a significantly larger size:

This script weighs in at 935KiB vs the first script’s 1917 bytes. This size difference is because the adversary chose to encode the second stage in base64 and embed it within the script. In some instances, I’ve seen adversaries embed multiple binaries into a script resulting in script sizes above 1MB. This helps the adversary avoid making network connections to get subsequent stages, but it gives defenders some extra clues. First, large scripts are more suspicious for any defenders that go hunting. Also, the more content adversaries include within their scripts, the more likely they are to trip YARA rules. We can see an example of this with these scripts.

For the VBscript containing the embedded stage, YARA detected an encoded Windows EXE. For the JS dropper that didn’t have embedded content, YARA found nothing (although a custom ruleset would work better). For this demonstration I’m using the default YARA rules included with REMnux.

An additional issue embedding poses for the adversary: once a malware analyst has the first stage script, they can extract the subsequent versions easily, depending on the level of obfuscation. In this case, I could copy all of the content from TVqQ through the end of the string and paste it into its own file named mal.b64. Then I used base64 -d to decode the file into a Windows EXE.

Sure enough, we can see the extracted material is a Windows EXE! If you’re looking for detection ideas for this path, you can focus on the script content itself and use YARA, nework signatures, AV rules, and possibly behavioral analytics like wscript.exe spawning things it just wrote to disk.

AgentTesla is a .NET stealer that adversaries commonly buy and combine with other malicious products for deployment. In this post I’m tearing into a XLSM document that downloads and executes furthe...

When adversaries buy and deploy threats like AgentTesla you often see this functional and entertaining chain of older exploitation activity with some .NET framework tradecraft you’d expect from som...

In this post I want to walk through a process of using the NodeJS REPL (Read, Eval, Print Loop) to safely decode portions of malware during analysis. If you want to follow along at home, the sample...